Can the mid-engined Vette live up to the hype? Very nearly... 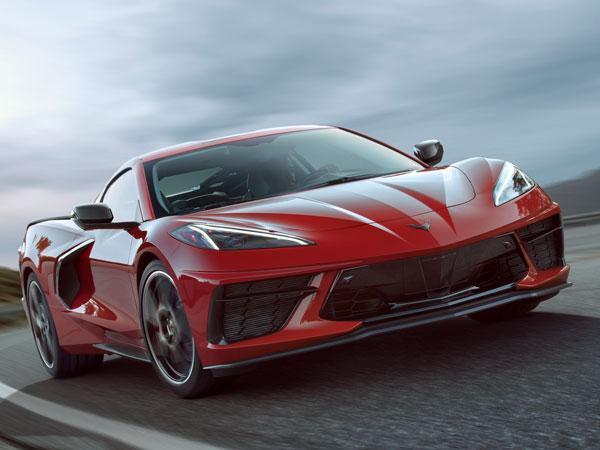 It’s hard not to think of the new Corvette as a wannabe supercar. It has the visual proportions, mid-engined layout and raw performance numbers to qualify for the club. It has a good number of the personality traits as well, but it isn't a fair comparison. At least, not yet.

The C8 is a sports car. A muscular, mid-engined sports car, but still one that is going to be priced against much less spectacular machinery. Of all the car's statistics, the most impressive is the one with a dollar sign in front of it. Find a U.S. dealer prepared to sell it for list price - unlikely for several months at least - and an entry-level version of the mid-engined Corvette is $59,995.

The current exchange rate is slipping by the hour, but as I write that is the equivalent of around £49,000. A pretty meaningless number in isolation; there is no chance of any C8 reaching the UK for that. But for context consider that the base Porsche 718 Boxster is $60,250 in the ‘States with half the cylinders and less than two-thirds the power. The only cheaper mid-engined sports car that is (nominally) on sale in the U.S. is the almost entirely forgotten Alfa 4C Spider.

Nor does the base Corvette 1LT come with windy windows and a hole in the dashboard where the audio system should be. Entry spec includes power seats, dual-zone climate and a 10-speaker BOSE set-up. The 2LT bumps the asking price to $67,295 and adds heated and cooled seats, a heated steering wheel, 14-speaker BOSE, native navigation (cheaper GM models just support Carplay and Android Auto) a head-up display and a performance data recorder system. Beyond that a 3LT adds plusher interior trim and chunkier sports seats, costing $71,945.

More important is the Z51 performance package, which can be added to any C8 for $5,000 and absolutely should be. This brings a performance exhaust that liberates an extra 5hp, a limited slip differential, bigger brakes, a meatier rear spoiler and proper Michelin Pilot Sport 4s in place of the standard car's all-season Michelins. It also unlocks the ability to specify adaptive dampers for an extra $1,895. Even combining the 3LT and Z51 packs with the magnetorheological shocks still comes in at less than the $81,950 an un-optioned Cayman GTS costs Stateside.

Seen in the flesh for the first time the big surprise with the C8 is how familiar it looks, certainly from dead-on at each end. Both headlights and taillights are similar to those of the last ‘Vette, and the front has a similarly sharky design. At the rear there are now cooling vents in the bumper, and the exhaust pipes sit two-by-two on each side rather than four wide in the centre. But if you are coming to a C8 straight from a C7, as many buyers will be, much is familiar.

The side-on view is more different for the obvious reason of reversing the order of engine and occupants. The rear deck looks big and high because it is, practicality matters to Corvette buyers and there is enough luggage space packaged behind the engine to accommodate a bag of golf clubs; it can also be used to carry the targa roof panel if this is removed. There is also a smaller ‘frunk’ at the front of the car. Total luggage space is 356 litres, less than the Cayman but still impressive for something with an engine in the middle.

Opening the door brings the next surprise – the absence of the traditional Eau de Corvette, that smell of resin and inexpensive plastics that has become the car’s olfactory hallmark. Materials are good; I drove a fully laden 3LT and nothing felt in any way downmarket for the price, leather and Alcantara on most contact points and naked plastic relegated to less accessible areas. Digital instruments are standard, with a driver-focused touchscreen and strange centre console which pretty much forms a wall between the front seats. Heating and ventilation controls are on the top of this, and soon prove to be almost impossible to see. There are two substantial cupholders, but these are hidden under a flap when not in use. Gears are selected by ‘PRND’ buttons in a small pod that’s reminiscent of that found in the Lamborghini Huracan.

The gearbox is another really big change – the arrival of a standard eight-speed twin clutch transmission replacing the C7’s manual and torque converter options. ( A senior engineer working on another sportscar project recently told me he had absolutely no idea how GM had been able to do such an advanced double-clutch for the cost.) Given the complexity of the new transmission it's no surprise that GM has opted to keep the other side of the powertrain entirely familiar: a 490hp LT2 version of the long-serving 6.2-litre ‘small block’ V8.

I drove the car in rural Michigan ahead of the formal launch programme, and without a photographer - so apologies for these cheese-tastic handouts. I wasn't chaperoned or limited in what I could do, but my time was spent exclusively on public roads. In total I had about half an hour, driving the same route with the targa roof on and off. It was enough to confirm the C8 is a leap forwards.

The powertrain is good enough to vindicate GM's decision to stick with the old engine. It offers another familiar link to anyone coming from an older Corvette, and remains the car's defining feature. The pushrod V8 might be lacking in smarts but it is effective and - as importantly - hugely charismatic. Throttle response is instant, mid-range torque is plentiful and there are good noises all the way from idle to a full-on charge. The C8's limiter calls time at a lowly 6,600rpm, which will likely attract some sneers, but it sounds far better in proximity to its redline than many alternatives do one or two thousand revs higher.

The double clutch lacks the torque bump on upshifts that junior supercars tend to have these days, working cleanly in both auto and manual modes. The steering wheel paddles are light to operate and lack the rewarding "clack" of something like an AMG Merc, but they can do a neat trick; like GT 911s, pulling both back at once disengages the clutches, releasing them then dumps into gear. Good for burnouts or deliberately aggressive launches. Gearing remains stratospheric - another Corvette trait - with an indicated 70mph equating to just 1,500rpm in eighth. That will help economy, but it does mean several downshifts are necessary to get into the acceleration.

The C8 has been designed for cruising as well as blasting, and at lower commitment levels refinement is genuinely impressive. The big V8 sits closer to occupants' ears than before, but is quiet and burbly under gentle use. The cabin suffers from much less of the brain-buzzing low frequency hum that earlier models had. Roof off there's buffeting above 60mph, but it's reasonably calm below that. Ride quality is good, the base chassis tune definitely softer than junior supercars. The Vette is compliant over rough surfaces and, even in the least aggressive Tour setting, the adaptive dampers maintain discipline over crests and compressions. Sport and Track make it firmer, but neither feels too stiff for road.

Don't worry, there is still an edge. The C8 is quick, properly so. The realisation that this will be the slowest and least powerful version of the car is a slightly startling one. GM claims a sub 3-second 0-60mph time, and there is a launch control mode to help realise that. I didn't use that, but even a stamped-throttle start with everything switched on had the in-car performance monitor reporting a 3.5-second run. That's properly fast territory.

Even lesser versions of the C7 Corvette always felt traction limited at lower speeds, with the almighty ZR1 threatening to shred its tyres regardless of velocity. The C8 has much less difficulty finding grip, losing the edgy feel that its front-engined predecessor had on twistier stuff, but with the ability to carry much more speed everywhere. In slower, tighter corners the rear end does play to the throttle, but in quicker stuff it feels absolutely planted, especially with the huge adhesion the Pilot Sport 4S tyres generate. It's a chassis that needs either heroic sweeping corners or a racetrack to properly wake it up; sadly I had neither.

It could also be why I didn't bond with the steering, which was the big dynamic disappointment from my brief time in the car. Like the C7, the C8 has a fast-geared helm which delivers instant responses and sends the front end snapping for apexes. While there's no difficulty building faith in the car's ability to turn at road speeds, the steering is almost totally lacking in feedback, with precious little sensation from the front axle reaching the wheel. (Which, incidentally, must be the squarest since the Austin Allegro.) I drove a revised GT350 Mustang on the same roads shortly afterwards and it was night and day in terms of sensation.

There are other grumbles, too. The driving position is odd, for some strange reason the C8's driver's seat is positioned higher than the passenger's; even its lowest setting still feels too high for a sports car and will leave anyone much over six foot feeling short of headroom with the targa roof in place. The long dashtop also creates lots of distracting reflection in the shallow windscreen, especially when driving through trees in sunshine. Rearward visibility is poor through the small back screen, the rear-view mirror incorporates a camera-based system (what would normally be the dimmer tab switches between modes), but the video display was too dim on a bright day.

None of these should distract from the fact that the entry-level C8 is one hell of a car and - for the money - unbeatable. It is a bit too big to be regarded as a true supercar, a little heavy and with an all-round mission that is more softly focused. Faster versions will get much closer to encroaching on the territory of the real show ponies, including both an overhead camshaft turbocharged V8 and ultimately a part-hybrid variant that is reported to have close to 1,000hp.

Some C8s will come to Europe and a few even to the UK, Chevrolet has withdrawn from volume sales on our side of the Atlantic but Corvettes and Camaros are still distributed by a German group and there may well also be parallel imports. Chevrolet insiders have said they will produce right-hand drive versions in time - leaving the question as to whether the car will be pushed in overseas markets better than its predecessors. It should be - this feels like a Corvette that could travel very well indeed.