stand on which the

was unveiled. Hatz's past CV includes spells at BMW Motorsport, a move to Porsche for F1 engine development in 1989, Technical Director at Opel's motorsport division and then serving as head of engines and transmission development at Audi before expanding this role to the whole VW group in 2007. He's been the Porsche board member in charge of R&D since 2011. 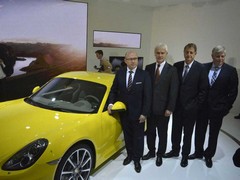 Hatz (right) with the Porsche bigwigs at LA

momentum shifting towards the

"I have to say I was aware of this in Geneva when we launched the Boxster, but I think

is something different because it is a 2+2. I am a fan of both cars but when I have a choice of which I would have as a first car, it would always be a 911. I drive a lot and 90 per cent of the time I use a 911. I had a Boxster in the summer, my wife didn't like the Boxster before because she doesn't like 'female' cars, but she likes the

"Basically, I see the Boxster/Cayman as a second car, and as an entry point for people coming to our brand, but the 911 is a first car. But I have to say that I like the Cayman very much."

Hybrids - how do they fit into a range that has diesel Cayennes andPanameras?[This following some unashamed gushing about life with aPanamera diesel...]
"I'm also a fan of the diesel. But diesel is not an answer in China and it is not mainstream in the United States. I found it very difficult in my former job [Audi Motorsport] to launch diesel here in the US. That's the reason I said we go to Le Mans with a diesel and race here with diesel, and today I think they launch a diesel street car for the US. Hybrid is for US and China. In Europe diesel is at the moment the answer. What is interesting is the next generation, they will be plug-in hybrids. I am pushing hard for plug-ins, then I think then hybrid can really show its potential, and that really is a cool answer to all requirements. What I found with the hybrids is that people want to drive electrically in town, and that's going to be possible with the plug-in. It's an expensive solution but it's interesting from a technology perspective. But for overall efficiency on long journeys the diesel is unbeatable.

"Also now with the Cayenne V8, everybody is surprised by the sound, from the outside it sounds like a gasoline V8." 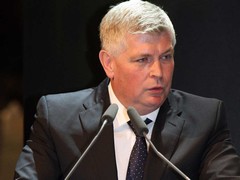 Will it fit in the Panamera?

The mid engined sports car...
"We have always a lot of ideas, at the moment I think this is a good idea but it's not the near future. We've just launched a new 991. Now we have Boxster and Cayman, then we have 911 variants, turbo, GT3 and so on, then the 918 next year. I think we have so many sports cars now that we don't have any need for a model above the 911 GT2 though."

Single stud wheels are a problem, will you stop providing them?
"We will continue with that. I know with the GT3 we had to modify the torque rating and we changed to new nuts with 600Nm, and if you run the car on the race track, you will eventually have to change the hubs every 15,000km."
But people forget and then you have problems. 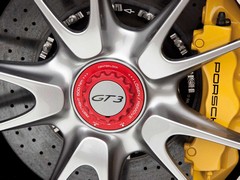 "But if you use them properly, it works. We will continue to provide this system."

Lovely RSR photos just shown. Is it true that the RSR and Cup car will usethe old Mezger engine and not the new DFI motor?
[Grimacing] "I know where the photos were taken and I don't know how they did it. We want to participate next year [the next day Manthey were announced as running factory 991 RSRs at Le Mans 2013] and, yes, the RSR and Cup will use the old engine. It is very reliable and strong and it does a good job and in the Cup it will be 3.8 litres. It was an easy decision."

Sport Turismo. Looks like a finished production car...
"We've been driving the concept here in LA, we're doing some clinics in the US and in Asia and then I think will be clear if we can do such a car - one which is close to a station wagon. That was our question - if we were 100 per cent sure we wouldn't have done the concept. I like it and we have a good chance to build it." 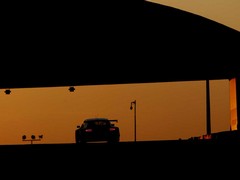 The seven-speed manual is a bit of a disappointment, especially shifting

"It's the first seven-speed manual in the world and because of the way it is packaged everything has to be very precise, it's good now but we need to work on it in the future."

Electric steering...
"We have put a lot of our know-how into this system so you get the feedback. We have worked very hard to get this back into the car. But anyway hydraulic steering is past - today we have to work on fuel efficiency and electric is a way to save fuel. What I don't like on electric systems where the assistance is variable and the feel is not consistent. On the Cayman and the Boxster, the car is very accurate and you get the feedback - we have tested a lot with test drivers and we have no complaints. Our number one test driver Walter Rohrl said it was difficult in the beginning but now it is good."