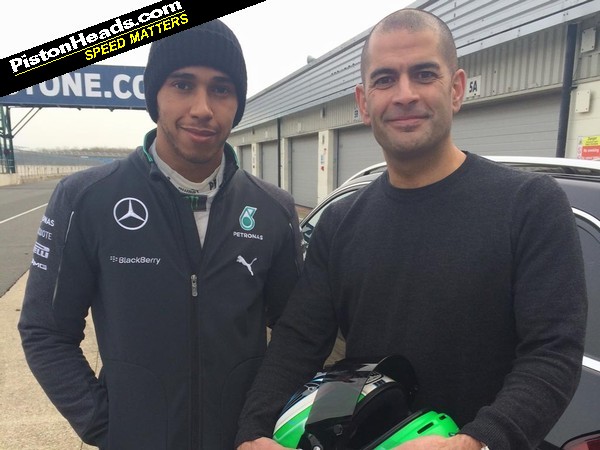 He arrived in a Mercedes C-Class with some kind of McLaren signage down its flanks, I remember that much. And he wasn't driving. The reason why Lewis Hamilton wasn't driving was that he didn't hold a driving licence but, such was his fame as The Next Big Thing, he had been invited to come and compete in something called The Autocar Sideways Challenge. 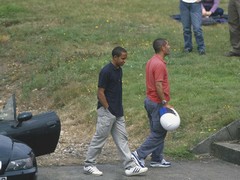 Now, The Sideways Challenge was the rather excellent by-product of a pub conversation between my two friends and colleagues Steve Sutcliffe and Colin Goodwin. Its aim was to take professional drivers from different disciplines, throw them in a powerful rear-wheel drive car and to investigate instinctive car control. Yes, it was a flawed method of assessment, and, yes, success was rather skewed in favour of those who spend a lot of time sliding street cars. That's right, journalists! But it was a fun exercise that uncovered a few quiet heroes. And exposed a few frauds.

Lewis, the champion karter with zero street car experience, the kid underpinned by Ron, was game enough to accept the invitation - or McLaren foisted it upon him.

The judging process was quite simple. Several Autocar staff members were placed on the outside of a marked course - a large, wetted circle at the Chobham steering pad - and awarded points for drift angles and control. One mug sat in the passenger seat and judged the mayhem within. In 2000, I was the mug. 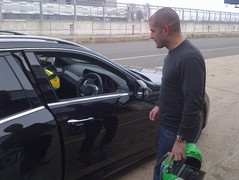 "So Chris, apparently you can drift..."

Lewis struggled with sliding an M Coupe. Remember the last time you went karting, then jumped into your road car and felt that worrying sense of disconnection? The slow steering, the non-responsive brakes, the sensation of it being a great big jelly? Well, that's what he must have experienced. Not forgetting the incredibly slow steering that required you to work through an entire turn of lock - crossing his hands being some Lewis had never done before - before finding a slip angle at which the car would settle. The whole thing was completely foreign.

But like a trooper, he tried, he manned-up with a smile and, when it was all over, he said thanks. Then, as he waited for his C-Class to take him home, he came over to us and asked if he might have a play on his own to try and figure it out. I remember thinking at the time how terrifyingly motivated he seemed.

Several years later, when he signed for McLaren, I phoned the team and asked if it might be possible to invite Lewis back to Chobham - not for a competition, but to have him show us that he could now properly spank a road car. They said no. I didn't bother asking again. 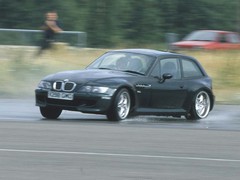 Lewis struggled in the M Coupe...

Fast forward to two Fridays ago and I'm standing in the old Silverstone pits. A few hours earlier I had driven a Mercedes E63 estate like a wally for a lap of the National Circuit with a special camera filming me. Afterwards, Nico Rosberg did the same. Now it was Lewis Hamilton's turn to wreck some tyres.

He arrives quietly, smiles shyly to a few of us gathered in the garage and settles into the E63. He adjusts the seat, receives instruction as to what he should do for the camera and then heads off onto the circuit. There follows much tyre screeching from around Northampton. He arrives back in the pits, removes his crash helmet and displays a quiet grin.

All the while, I'm thinking 'will I ever get another chance to ask Lewis Hamilton if I can drift a car next to him drifting a car, and complete a circle that was left unfinished 14 years ago?' You have to think that stuff, because if you use phrases like 'complete the circle' out loud people think you're a mentalist. 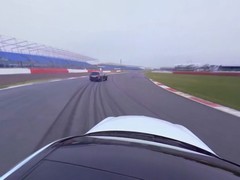 So I ask the Mercedes F1 PR boss if he might introduce me to Lewis. He does so.

"Hello, my name's Chris," I gabble - the way people always gabble when they meet their heroes. Yes, perhaps I should have mentioned Lewis is my driving god and I've not stood anywhere near him since that Sideways Challenge. I stick out my paw the way I always do and attempt to reciprocate the pressure of his handshake, fail dismally and continue.

I ask him if he remembers that day in the M Coupe.

"Yeah, I remember that", he says, still grinning slightly, "I wasn't very good at it, but I'm a bit better at it now."

I stump up some courage. "Would it be possible to do a few laps with me sliding this car [pointing at a second E63, they were littering the place, frankly] as you do the same in that one?" 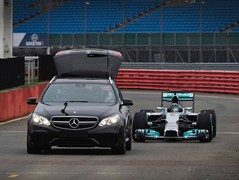 Would make a nice two-car garage

And that's how I come to be barrelling into Copse at 110mph, watching a white 585hp estate car being flicked into a slide, a beautifully controlled slide which persuades the rear tyres to paint thick black lines from apex to exit, as I do the same. And why, at that moment, I think to myself that even as someone who has enjoyed the most spoiled, lucky, privileged last 10 years of his working life, this is coolest thing I've ever done.

It was supposed to last one lap, but it continued for several. It took me a while to get in sync with his frankly better slides than mine, because his car had a limited slip diff and mine didn't - get the excuses out the way now Monkey. But, once I'd worked it out, for two blissful laps I behaved with Lewis Hamilton, F1 world champion, supreme talent and my driving hero, the way I do with Sutcliffe, or Meaden, or Bovingdon at the end of a three-day shoot when we have a circuit, some cool cars and rubber to shred. We hooned. I hooned. With Lewis f***ing Hamilton. 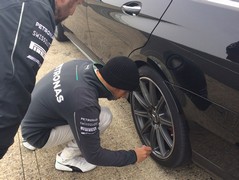 "Yeah there's another lap in these, definitely"

And the man can hoon. He was unsettling the car under brakes, letting that big estate car's arse rotate, then ladelling in the power and riding big, smoky slides all the way across the circuit. He was nailing perfect transitions - from left to right at Woodcote - the type you just don't expect from a single-seater racer.

He proved beyond any reasonable doubt that he can drift a car.

There are only two problems impromptu drifting with Lewis Hamilton. There aren't many photos for me to remember it by. I have the odd iPhone snap, and we'll soon be uploading a seriously cool app that allows a 360-degree view of those twin slides. But I kind of like the fact that, for now, an exceptional moment in my life exists in my memory.