2013 will be remembered as the year that two cornerstones of the fast car community were altered against the will of the vociferous legions that honour them. Porsche gave the

; Renault did the same to

and added a turbocharger into the shame. 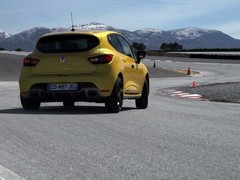 Does this look boring to you? Thought not...

It is easy to dismiss the Renaultsport Clio 200 Turbo as a foppish, bloated machine unworthy of succeeding possibly the greatest uninterrupted hot-hatch dynasty of them all - too easy in fact. You have to try and understand what Renault is attempting to do with this car and, even though car makers are reluctant to discuss future plans, you have to guess where this first version might lead in the future. After all, turbocharging makes for much easier tweaking.

So I've tried to see from both sides: as the bloke with the current Clio 200 Cup, light seats, induction kit and track day addiction, but also the ordinary fast car lover who spends all their time on the road. And, perhaps most importantly, I've tried to remember what it was like to be young and for a car like this to be one's first rung on the fast car ladder. For that generation I'm not sure paddles, symposers, RS buttons and forced induction are anything other than gold dust.