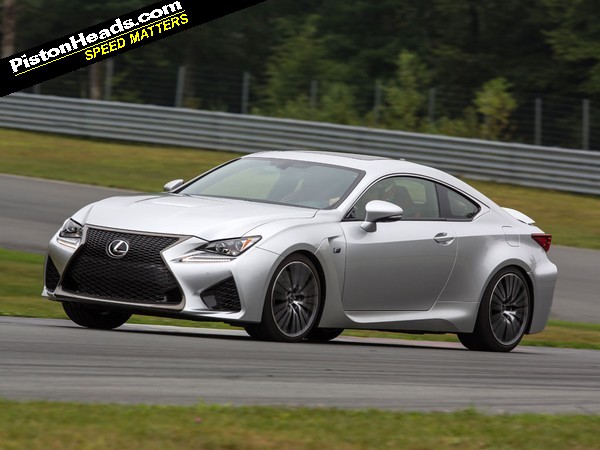 There is no finer theatre in the automotive world than a passionate Japanese engineer attempting to explain the inner working of his latest creation. Kazutoshi Mizuno,

father of the modern GT-R

, once gave a virtuoso performance to a few gawping hacks on his fast car philosophy, which as far as I could tell went against pretty much every accepted tenet of modern physics. But I left the room a believer. 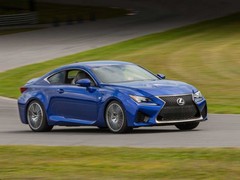 Well, they certainly didn't hold back on the looks

Japanese engineers are design fundamentalists. They are pure perfectionists, and I love listening to them - Lexus's Yukihiko Yaguchi was no different. His message was less evangelical but saturated with pride at a career which began on the original LS400. His audience was struggling to concentrate as the bizarre acronyms flowed - the small Brit contingent had been delayed on their way into New York. So, as Yaguchi-san began his sermon on the origins of the

To the point
Mercifully, the presentation was short - Japanese tech briefings can last days, which is fine if you're in the mood but brutal if you've been awake for 23 hours. 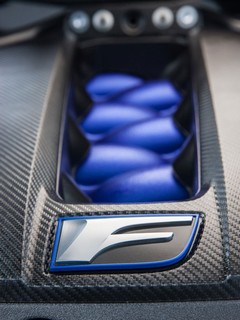 It struck me as I watched my friends and colleagues pretending to earnestly take notes, just as I was doing, that this whole fanfare was potentially pointless - and through no fault of Lexus. The reason I'd reached that conclusion then began to seem a little disturbing, saddening, even. Because here was Lexus flying us to the US, giving us the wonderful Monticello Circuit to play with, here was Yaguchi-san bearing his heart about the development of the RC F and the typical fastidiousness displayed by a Japanese high-performance brand, and yet all anyone would ever want to know about the car was if it was better than

That's it. All that passion, all that engineering - titanium intake and exhaust valves, the ability to switch between Otto and Atkinson cycles, and so much besides distilled down into one simple barometer of success. Is it as good as a certain BMW?

Inescapable truth
A sad situation, when you think about it. But, in the modern consumer age, an unavoidable one and one peddled by people like me. I mean, does it really matter if the RC F is better or worse than an M4? So long as it's a great car that people want to own, should the comparison matter?

No doubt my pangs of sympathy were brought about by a quick peek at the spec sheet as we'd walked in to the room. Here's Lexus attempting to elbow its way into the M4's marketplace with a coupe that will not seat four adults in any comfort and that weighs 1,840kg but offers 392lb ft of torque at a high 4,800rpm. Forget peak power outputs and claimed performance times, we all know that if you want to know how punchy something will be on your everyday grind, run some arithmetic on the torque-to-weight ratio, then see where the peak torque arrives. I'll do it for you this time. M4: 405lb ft, 1,850rpm, 1,537kg. RC F: 392lb ft, 4,800rpm, 1,840kg 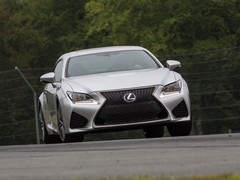 To channel the great R Burgundy - this new Lexus is badly under-gunned. Which in a class that has quietly become a repository for small German muscle cars, is something of a worry.

All mouth
No matter that for those of you - make that us - who appreciate the styling. Who see the strands of LFA DNA and a shape which is more complicated than anything European in the class. Yes, Lexus appears intent on delivering a vehicle whose entire frontal area is an intake grille, but the rear haunches are spectacular, as is the way a few steps either side of a the square-on rear reveal different shapes and protrusions. The stacked exhausts? Not for me, ta.

The specification is a mixture of the sublime and the baffling - actually, it's almost all appealing but spoiled by the spectre of that kerb weight figure. The powertrain is IS F, plus quite a bit more. Capacity is now 5.0 litres, power is 478hp at 7,100rpm and you already know the torque figure. It runs the same eight-speed automatic gearbox as the old saloon. It's two-wheel drive only with a Torsen diff as standard with the option of a torque vectoring differential. 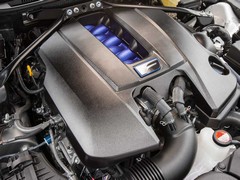 V8 is tuneful but at least two turbos down on rivals

We trundled from Westchester to Monticello in Normal mode and, having written that, I now need to tell you about the modes. All cars in this class simply have to have 'modes'. I hate them. The RC F has four modes, Normal, Eco, Sport and Sport Plus. Each offers a different variation of throttle response, electronic chassis system intervention and dashboard layout. Eco is actually the most radical, because it's here that the combustion cycle is altered for increased fuel economy. Throttle response is wound right back too.

Chop chop
I hate judging ride comfort and chassis subtleties in the US for a European audience because the conditions are so different - in the States, you tend to either drive on perfectly smooth surfaces, or completely broken ones. And over the latter it won't come as a surprise to learn that the RC F crashes about.

On the smooth stuff it's firm, but controlled. I'd say it was more supple than an RS4, but less so than an M4 in its Comfort damper setting. But I'd want to drive them all in the UK to be certain. The transmission is easy in traffic and slushes neatly between eight ratios. Seven of those are performance related, the eighth is a true overdrive. The steering is notable for its clever weighting and I think if I back-to-backed it with a new M4 on the same road, I might prefer this aspect of the RC F to the BMW. But I haven't, so I can't make that call yet. 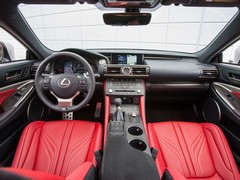 Cabin is audacious and beautifully executed

I simply love the cabin - in many ways it represents what I want from a fast Lexus, and that is simply a statement of Japanese style that doesn't conform to the German class norm. The centre console rises above thigh height, there are numerous decks and nooks and baffling shapes that meet to create a very, very special feel. The metal surround to the analogue clock is delicious.

But why go to all this effort, then design some special front seats and not allow them to drop low enough? Yep, you sit too high in this car, and that's a big minus-point for me.

Track and field
After a two hours trundling through New York state we arrived at the quite excellent Monticello circuit. This is a private member's track, run just like a golf course and the full lap is so good you just know Herr Tilke had nothing to do with its design. 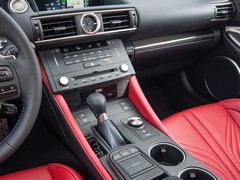 Quality and imagination both feature highly

There was much talk about the RC F's track abilities in Mr Yaguchis's preamble the night before, but it takes just two turns to realise those words were probably unwise. The RC F is a heavy car that struggles to cloak its mass. In terms of direction changes, turn-in and brakes, the new M4 runs rings around it.

The engine is, in isolation, quite joyous - screaming to 7,300rpm with a more sophisticated howl than an AMG. But if ever you wanted proof that the new bi-turbo generation of Germans have moved the game on, try the RC F on a track. Even with a claimed 392lb ft, it seems strangely flat exiting second gear corners, and at no point does the car feel anything like as quick as the BMW. The outgoing C63 507 would disappear in a straight line too. Lexus claims 4.4 to 60mph and a little shy of 170mph, which should be more than enough, but you really have to work to make it feel that quick. 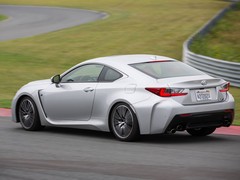 Nobody's going to mistake it for a BMW at least

Does motive force matter in this class? Not fractions of seconds, no. But the RC F is a good deal slower than those two, and I suspect the RS4 is a mite quicker too. Most importantly, given the 4,800rpm torque peak, this is

which could easily be handed some manners by an M235i. And I'm not sure that's the way things should be.

Hope yet
The RC F doesn't leave the game at that though. Yes, it felt too big and heavy on a very challenging track, even with the clever, optional torque vectoring differential working hard, and running sticky Michelin Super Sports, but then it's a street car, so does that really matter?

On the road you have to rev it to make it move, but the reward is sublime noise, a crisp gearshift from the steering wheel paddles (which felt a little cheap to me) and what an Autocar road test in 1977 would have called 'good road manners'. I left it in comfort mode, and found that the best balance of response and, er, comfort. 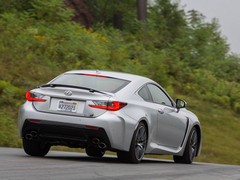 'Not German' is actually a pretty strong sell

Look, it's just a very pleasant place to be. It ain't no M4, but then it'll be sold in tiny numbers, is arguably a much more appealing object, and for those who couldn't care less about long powerslides, lap times and beating M235is at the lights, I think it might prove to be a great car. There's also a suspicion that it would reveal further layers of character over time, in the way an M4 might not.

BMW can rest easy, and Lexus has probably arrived at a 2014 party in 2008 clothes, but the RC F still has something about it. And it's not German, which for some people will be enough on its own.