Abarth worked brilliantly as Christmas transport no matter the weather! 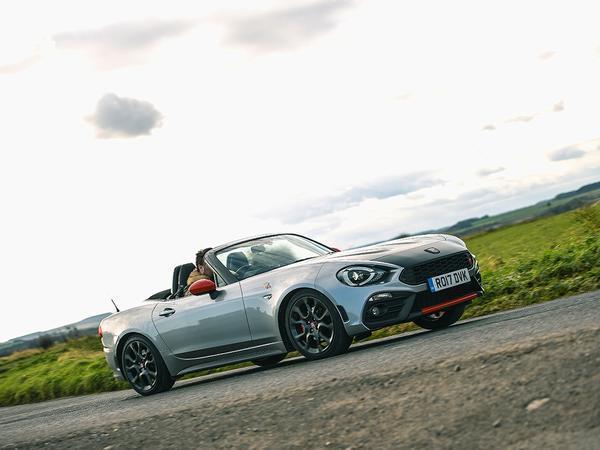 With the Abarth soon set to depart from the PH fleet, various members of the team have been scrabbling for the keys to have one last go in the little roadster. I, on the other hand, was fortunate enough to spend the Christmas break and most of January in it.

During the cold snap over Christmas, the windows froze over, preventing them from dropping the centimetre or two necessary to open the door, and the wing mirrors never managed to completely defrost, leaving the centre completely frozen. Luckily, though, I never experienced any of the technological gremlins that Matt spoke about in his last update, although the infotainment system did get a little confused, refusing to output a voice call to the headrest speakers whilst Waze continued to blurt out directions through the door units.

Driving out through the Surrey hills on a quiet morning, those foibles cease to matter. The car keeps you entertained, scrabbling for grip on its skinny tyres, the exhaust pops and bangs on the over run and the sense of speed is enhanced by your low seating position, with only what is really needed to hand. On which point, I fully agree with Matt that the interior in the 124 is functional and snug, but I can't get over the fact that Abarth decided that Alcantara would be better suited to the dashboard than parts of the steering wheel...

And that idea of going for an early drive in the Abarth is great, until you need to start up on a quiet street. The noise that comes from the Monza exhaust somewhat reminiscent of a yacht idling at its berth, just burbling away. In an ideal world, the exhaust system would be connected to the Sport button so that the full baritone notes are unleashed only in conjunction with the improved throttle response, allowing Normal to keep the exhaust muted to a more sociable level.

All in all, this may seem a somewhat negative reflection for a car we've so enjoyed, but the fact is that so much pleasure can be derived from driving the Abarth, even on mundane journeys, that the little niggles are what start to really play on the mind. Despite those minor irritations, however, the Abarth is certainly a car that will be remembered fondly once it's gone back.

Previous reports
Naughty but nice? A noisy Abarth noses onto the Fleet
Can 124 score 10/10 against 595 and MX-5?
Sliding around Silverstone in the Abarth puts it in Matt's good books
Electrical gremlins starting to emerge in the little Abarth