Can the French revelation deliver on its promise of unencumbered motoring fun? 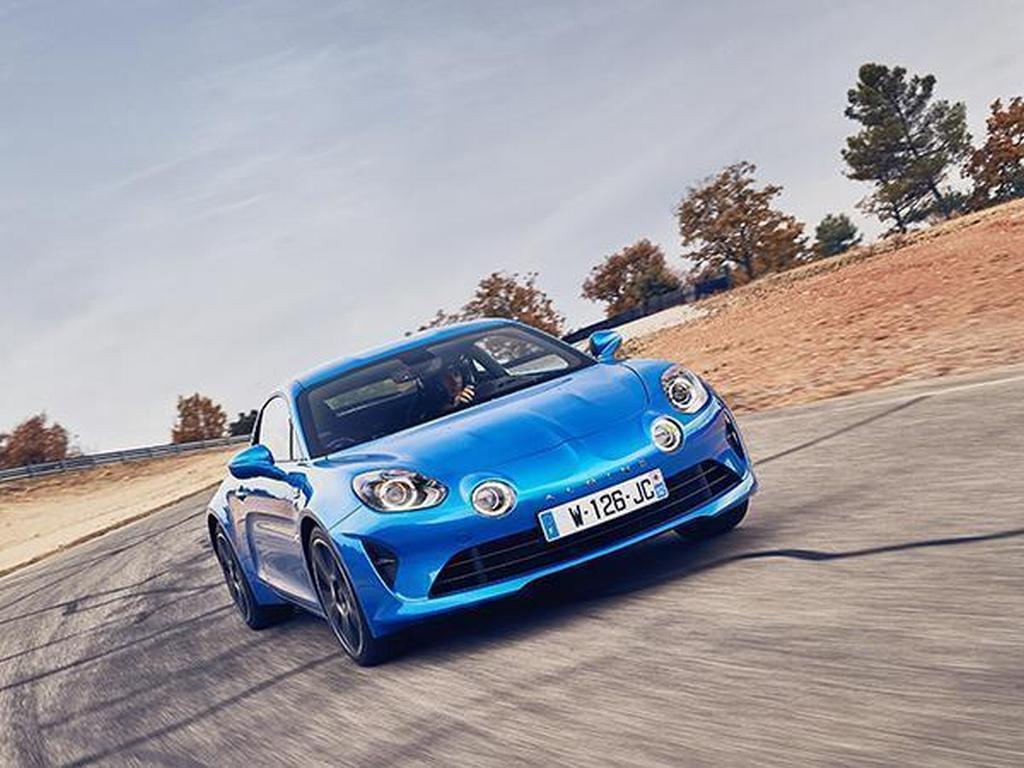 There's snow and ice beside these narrow, hillside switchback roads and your breath steams in the cool, crisp, morning air. There's bit of a Monte Carlo Rally vibe to the place, then, which is entirely appropriate because, oh look: here's the new Alpine A110. Low, lithe, little, and blue. A small car for small roads and small corners and - we'll come to this - some of the biggest smiles you've had in ages. Alpine is back, so the hashtag goes.

There's something to bring back because Jean Rédélé, a Dieppe car dealer, started modifying cars, later making his own, based on Renault mechanicals, and was good at it. He enjoyed driving in the mountains and had success in alpine rallies, so called his company Alpine when he established it proper in 1955.

His cars were fast, too. The A110 locked-out the podium on the Monte in 1973 and won the World Rally Championship in that, its inaugural year. Subsequently Alpine was absorbed into Renault from where it went... well, not quite so well, longer-term. Renault eventually canned Alpine in 1995 off the back of the A610, a good car, but one which hardly anyone bought.

But now it's back. And whatever you think of this Alpine A110 - a slightly retro-styled small coupe, which I happen to think is achingly pretty - I do believe it's worth doffing your cap to the people who've made it happen, because when you look at the numbers, it's quite a bold move. This isn't just a new model, it's a new brand.

The Dieppe factory, where Renaultsport Clios and race cars are still made, has been modified extensively for the new Alpine coupe to be built there too. In total - Clios and all - it can make no more than 10,000 cars a year. There'll be the creation of a new dealer network, and all of the aftersales support that goes with it, all of which sounds expensive.

But nothing sounds so expensive as the fact that today's new Alpine A110 has an entirely new, built-from-scratch all-aluminium platform, all of its own. Caterham was in at the start, too, you might remember, but it bailed in 2014 and Alpine was left to go it alone.

The architecture is a thing of beauty. This is a compact car - 4.18m long, 1.8m wide and 1.25m tall, with two seats inside it and a transverse 1.8 turbo engine mounted behind them. It drives the rear wheels via a seven-speed DCT transmission.

It's packaged really impressively. Extrusions are bonded, riveted, in places (near the engine) welded, with pressed body panels atop. It's all aluminium bar some steel rivets and a plastic roof. There are double wishbones front and rear, which occupy more lateral room than, say, struts that Alpine could have carried over from a Clio. Yet the engine fits between them at the rear, while the 45-litre fuel tank fits between them at the front; an unusual position but Alpine wanted it there because it helps give a 44:56 weight distribution.

There are some other really key numbers here, but a Nurburgring lap time isn't one of them. Alpine says that laptimes aren't a priority, that speed isn't the biggie.

No, the numbers that count are a 1,080kg kerb weight and a decent 252hp, which gives a 228hp/tonne power to weight ratio. Tyres are relatively modest in width, too, at 205/40 R18 at the front, 235/40 R18 at the rear on this launch 'Premiere Edition' model, which comprises the first 1955 cars built (see what they did there). Later, 'Pure' models will get 17-inch wheels, slightly higher sidewalls, but the same tyre widths; 'Legende' cars retain the 18s. All run Michelin Pilot Sport 4s. Because who else but Michelin could it be?

All of which is, I suppose, a roundabout way of saying that, look, I know the fact that at (gulp) £50,000 or so, the Alpine looks expensive for a tiny coupe with four cylinders, but I don't know how you'd do it more cheaply. Even if they sell 4,000 of these a year that's £200m. Perhaps it's no surprise, then, that when Alpine talks about this car's launch, it references Mini. This, it seems, could be the start of something bigger. Something that'll justify the expense on this car. Alpine boss Michael van der Sande won't be drawn, beyond saying "we will have the lightest, most agile car in whatever class we're in."

This car is so light and agile, then, that it has passive dampers, soft spring and damper rates, and easygoing hollow anti-roll bars. Roll isn't your enemy, say Alpine's chassis engineers, who allow the suspension to ease over bumps because lightness is, as we all know, the gift that keeps on giving: it's easier to keep control of a light body. And besides, your 252hp still gives a 4.5 second 0-62mph time, brake discs are only 320mm diameter, there's no limited-slip differential and fuel consumption is a claimed 46.3mpg.

All of which means? It means the A110 is brilliant. Sure, they still could have taken all of these ingredients and got them wrong, but they haven't. The A110 rides well, there's a touch of a good Lotus Elise, or modern McLaren, about the way it both absorbs bumps and yet retains impeccable control of its body movements.

It steers precisely, too; lightly, and perhaps not quite as reassuringly as a Porsche 718 Cayman but with sufficient road feel when you look for it. A button on its diddy wheel adjusts the drive mode, with Sport and then Track bringing a bit more anger to the engine note and response, gearbox response and steering weight, and lessening the ESP (which has a separate off button) but leaving the general dynamics well alone.

Which is good, because they are absolutely superb. Agility and poise is, on the road, sensational, as it also is on the small hillside track where we pushed the A110 a bit harder. There's not a lot of understeer inherent in this chassis, and if you turn on even a neutral or trailed throttle, the weight distribution - the centre of gravity is between occupants hips - brings the back of the car gently around, from where there's sufficient power to ride out a slide beautifully. It feels like there's less roll steer and perilousness to it than an Elise. Yes, a Porsche Cayman has its own blend of mid-engined fabulousness, and a limited-slip diff option to go with it, but the Alpine is more agile again. More fun? Quite possibly. Could it do with an LSD? Out of a hairpin, where you can't get enough lateral load into the chassis to start moving it around, then perhaps so, because the A110's inclined to spin an inside rear wheel instead, despite a torque-vector-via-brake system's best efforts. And maybe on a really grippy dry circuit the same might apply. But LSDs have their own weight and refinement issues, and can make cars push on a bit under braking.

The A110 is probably better off without, then, because it might spoil what is one of the most delicately balanced, rewarding and perfectly composed sports car chassis I've driven in years. The engine and 'box? They're fine. The engine's a little boosty at times, but sounds zingy enough - it probably has the measure of a Cayman's noise. The gearbox doesn't: there wasn't the money to do a DCT and a manual, so they did a better DCT, they say. There are wet rather than the dry clutches you'll find on a Clio (and an extra ratio) but while mostly it's fine, it occasionally feels like you've pulled neutral on lift-off when you expect some engine braking. And the interior, though sweetly designed and very accommodating for big occupants, feels a touch lower rent than a Porsche too. Which is, I suppose, inevitable in a 1,080kg car (1,103kg in this launch spec).

But I barely think any of these things matter. The Alpine A110 is such good fun dynamically that, as with a Toyota GT86, you can overlook the foibles because without them the car would not be the car it is: it would be heavier, duller, slower. The wonderful thing about the Alpine is that it has a bit more power than that Toyota yet weighs 135-150kg less, and it has a more rounded dynamic ability too. Enough for it to challenge cars at any price, not just at its own. So break-out the bunting and the hashtags: Alpine is back, in sensational style.