Pilot Sport Cup 2s, no air-con and big Brembos; is this the Leon to beat the hot hatch best?

Here we are then, finally: a SEAT Leon Cupra 280 capable of lapping the Nurburgring in seven minutes and fifty eight seconds. Allegedly. Yes, it's the Leon Cupra

In fact you will be hard pressed to tell this mega Leon apart. The Orange Line pack as fitted to this car is available on the other Cupras as well, meaning it will take a detailed inspection of those Tangoed rims to prove this car's status. Behind the front wheels you will see the larger 370mm Brembo discs, while at each corner there are Michelin Pilot Sport Cup 2s, a £460 option when either Performance Pack is added.

Those Cup 2s are creating quite a name for themselves, used on the Ferrari 458 Speciale, Porsche 918 Spyder and - you've guessed it - Renaultsport Megane Trophy-R. A point we will return to later on, but it's safe to say from the outside the SEAT is as discreet - optional orange notwithstanding - as the Renault and Civic Type R are deliberately overt. 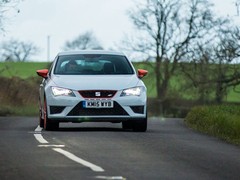 Up on its toes and ready to attack!

Inside it's far from a stripped out 'ring warrior, but there are clues to mark this particular Leon out. The air conditioning is gone, as too is the armrest and a storage box. Not exactly drastic, but they are noticeable by their absence. That said, perhaps the most significant omission is the regular stereo, this Ultimate Performance Pack down to four speakers in the name of weight saving. Having spent a lot of time in our

, equipped as it was with eight speakers and a subwoofer, the difference is marked; the sound is empty and weak, even to someone without much of an ear for these things. A shallow observation perhaps, but one that's always apparent.

Anyway, to the driving. The first miles in this car are a dreary commute across London in miserable weather; not exactly a favourable one but useful for highlighting a few key details. The first being that Pilot Sport Cup 2s do not like November. At all. The VAQ 'diff' struggles in vain to help the tyres out but they simply can't find purchase through the water. It's a bizarre sensation, the car feeling as if it's skating on top of the road as it desperately seeks out traction. Fingers crossed the rain holds off for our next drive...

It does, mostly. Up to Silverstone for a look at Porsche's 924 Le Mans car and the Leon gets a chance to show off properly. Heck is it fast. Even allowing for the negligible weight saving of the Ultimate pack, this car feels like it has 280 very strong horsepower shall we say. It punches through every gear rampantly, the acceleration never tailing off and the pace feeling about on par with an M135i. Really. That's once the wheelspin is in check, which is about the middle of third gear.

It could easily be argued that this time of year is not the best time to be testing tyres specifically designed for warm, dry tracks. That being said, at those moments where the road is dry enough and the tyres warm enough, the Ultimate Leon is devastatingly fast. 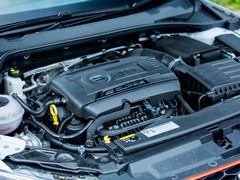 Driving it quickly is a fairly brutal process though. Those Brembos are still overservoed and grabby in the initial part of their travel; at the point they're feeling natural underfoot the car is stopping very rapidly indeed. At turn in you will notice how those tyres make the response even faster but also that the steering has improved. Perhaps it's the reduced unsprung mass of the tyres and brakes, but now the Cupra steering mode certainly feels less artificial.

Almost instantly after steering you'll want to be on the power, knowing that those tyres and the VAQ will launch you out the other side. In fact 'hurl' might be the better word there. The Leon really is unlike anything else here in the way it gobbles up tarmac so ferociously.

It does get scrappy at points, particularly if the corner exit is bumpy, but there's no denying the Ultimate is hugely exciting and effective when conditions favour it. Moreover, the driving experience is made more involving at lower commitment levels by those tyres, perverse though that sounds. You have to measure out throttle inputs smartly, be aware that they need to be warmed up and keep an eye out for damp patches on corner exit. And then damp patches on the seat if you don't see the ones on the road...

Here's a simpler way to put it: in three days of driving the Leon I smiled more than in dozens driving our long-term Golf R. It's a bit edgy at times, you have to be brutal to get the best from it and with any moisture on the road the Golf is quicker. But as a hot hatch experience, as a car to derive some joy from, it's way more invigorating than the Golf and the standard Leon Cupra too. 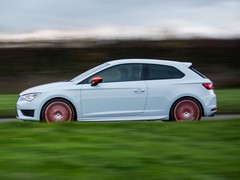 Ultimate is three-door only; orange is optional

But there is a problem. A few problems in fact. This Ultimate driving experience is very similar to that of the 'regular' Performance Pack, those tyres and brakes being the key to the Leon's edge. This car costs £2,200 more than a Sub8 Black Pack to remove the air-con and a few other bits inside, and doesn't really seem worth it. Remember the bucket seats are still a £1,250 option as well. If it was like a Trophy-R and removed a lot of weight then it would seem like a more acceptable compromise. SEAT doesn't want to do that, citing how the Ultimate is 'no impractical track day toy', but currently it sits as a slightly odd half-way house - it has the great refinement and everyday usability of the standard car, but with semi-slick tyres and no air-con that rather undermine those. The Cupra should fulfil the normal role, so it seems a shame that a car badged 'Ultimate' couldn't be more extreme.

There's also an overriding impression that the Megane and Civic remain more involving and rewarding driver's cars. In the little but important details like control weights, seats and noise, both the Renault and Honda feel more driver focused. That's not to say the Leon doesn't entertain, but the process feels a little more contrived.

So while this may be the Leon that really can lap the Nordschleife in 7:58, it isn't the one we would recommend to buy. Where the Trophy-R feels like a Megane taken to a more exotic plane, this Leon cannot warrant the premium over a regular Cupra Performance Pack. That is a car we rate very highly, and is easily our pick of the MQB hot hatches. While the Ultimate is fantastically thrilling in its own way, that doesn't prevent it from looking a little expensive and still third in our ranking of the 'ring record hot hatches.