BMW M2: By the numbers

We're driving the M2 this week - get in the mood with all the essential stats, prices and rivals here!

So here we are, just six weeks into 2016 and already getting prepped for another of the year's most PH-worthy new cars. The

in fact, comes from an enviable family tree of great performance cars and promises to make more expensive rivals look a little daft. It is also very blue. 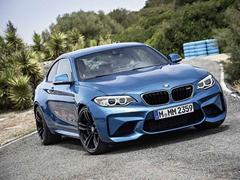 Hopefully combining the very best bits of the

, the M2 understandably comes with a significant weight of expectation on it. The launch is currently now on in California and the first verdict is imminent - someone has to do it. Here is the opportunity then to pore over the M2's vital stats and how they compare with its rivals. Then there's no need to repeat it in the review and more attention can be focused on the important subjective stuff. Like how the Smokey Burnout mode feels...

Very much unlike the Focus RS though, the M2 sits rather without direct rivals at its price point. As standard with the six-speed manual, it costs £44,070. Interestingly, beyond the DCT gearbox, a stereo upgrade and a few colours, there isn't very much to add on top either. There's one wheel option, one brake option, one suspension set-up and one steering system. Not only does it make the job of reviewing the car easier, it should make speccing an M2 a simpler process too. It does look rather good in black on the configurator, just so you know... 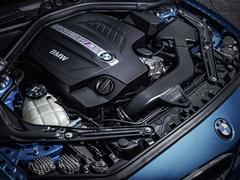 Power to the people

In fact it's probably useful to start with where the M2 sits in the tightly packed M hierarchy. Compared to an M235i, the M2 is £8,845 more expensive and gains 34hp, 37lb ft plus another 40kg. That's of course a simplistic comparison, the M car also featuring tech like the M Differential and a specific 'M' fettled steering system beyond the realms of an M Performance model. It could easily be argued the looks might well persuade customers to upgrade before any performance gain is considered.

Against the M4, the M2's 2kg weight advantage is of course nullified by the senior car's additional 61hp and 34lb ft. Power to weight ratios are 235hp per tonne for the 2 Series and 274 for the 4 Series. The price gap is £12,985, the M4 bringing additional engineering intrigue with parts like the adaptive dampers, carbon roof and additional turbo. Expect further 2 versus 4 (or should that be 2 by 4?) comparisons in due course. 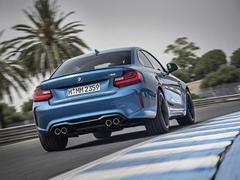 Enemies at the gates?

Now the rather tricky job of pitching a competitor set to the M2. From Mercedes, the

seems the most likely rival, its 381hp 2.0-litre turbo providing similar performance to the BMW and better efficiency (40.9mpg, 162g/km) if such things matter. A DCT M2, for reference, is rated at 185g/km and 35.8mpg. The AMG is cheaper too, at £42,545, and comes with the same performance flagship status. However there's no manual option, the BMW has the emotional appeal of two extra cylinders and there's a sneaking suspicion the M2 might be a sharper drive too. Interestingly the kerbweights are within 15kg of each other.

An Audi TT RS would seem like the most logical rival to the M2, if such a car existed yet. In its absence, there's the choice between the 310hp, 1,460kg, £39,245 TT S or - dare it be mentioned - the RS3, bringing to this bout vital stats of 367hp, 1,595kg and £39,950. Both will offer very nice interiors (who'd have thought?) along with finely honed powertrains, a particularly pleasant one for the RS3 in fact. But, practical concerns aside, could you really have an Audi RS hatch over an M Division coupe?

Typically BMW's biggest threat in this sort of comparo would be from Porsche - think of Cayman R versus 1 M a few years back - but there is no longer a six-cylinder Cayman available to buy. Let the sentence sink in for a bit. There aren't yet specs available for the 718 Cayman, but going from the Boxster info - and with the knowledge that the Cayman will be cheaper - the new four-cylinder, 2.5-litre S will present a tough challenge. Its 350hp is produced at an identical 6,500rpm, the torque peak of 310lb ft offered over a similarly broad range and there will be a manual gearbox available too. The Boxster is a significant 140kg lighter than an M2 also, so expect a similar advantage for the coupe. For reference a 718 Boxster S manual is £50,695, so it seems likely that the Cayman will be closer to the M2's £44K. All depends on how good that flat-four is really, doesn't it?

Knife to a gunfight 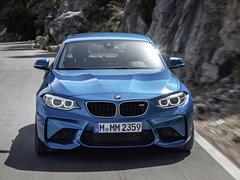 The BMW's other rivals come from a little further afield, not least from the

and its expanded global remit. And if the M2 is the very embodiment of the European muscle car it faces a tough challenge from the real thing in the Ford, at least on paper. The Mustang GT's £32,995 starting price is keen, its 421hp 5.0-litre V8 should push the emotional buttons and it's got the rear-wheel drive dynamics too. We've already mentioned the BMW has a Smokey Burnout function but that sounds dangerously gimmicky compared with the

- those with money to burn can fight that one out among themselves. For all the apparent similarities does the Ford's price point actually make it 'too cheap' in the eyes of potential M2 buyers though? Let us know your thoughts!

The Alfa 4C rather lacks the everyday practicality of the M2, but it is another rear-wheel drive coupe aimed at enthusiasts for £45K. It's also somewhere in the region of half a tonne lighter but - how to say this appropriately? - lacking a little dynamic polish. A wildcard entry perhaps.

What there isn't yet is a six-cylinder, rear-wheel drive coupe to rival the BMW. Got one yet? It's probably worth adding the Nissan 370Z NISMO to the list. Its 344hp 3.7-litre V6 is rather gruff and looks profligate compared to the turbocharged rivals, but the dynamics are decent and the 1,535kg kerbweight doesn't look so bad in the company. Even if that's without the 75kg driver all the others are quoted with, it looks competitive. The manual gearbox is good and it's very cheap too; the £36,995 list price looks affordable here before any discounts, which must surely be forthcoming given it's hardly the freshest car on sale...

Looking through this list of rivals, you'd have to say it appears an open goal for BMW. There isn't a six-cylinder Porsche on sale, a flagship TT hasn't been confirmed yet and there isn't a two-door Mercedes equivalent. When you think that the Focus RS was (and is) facing front-, rear- and four-wheel drive rivals all within a couple of thousand pounds of each other, the BMW's task is made to look even simpler. If BMW can take all that's good about the M235i - and there is plenty - then garnish with some M Division polish while retaining the old 1 M's feistiness, we could have a cracker on our hands. Full story soon!

Figures in brackets for auto